What can be done if another person has the evidence I require?

What exactly is proof, and why is it so important?

Evidence for a court action takes a variety of forms. It can be physical evidence (something tangible and tactile), documentary evidence (a written statement or material such as discs, tapes, videos, and photographs), or oral evidence (the testimony of a witness). The gathering of evidence as part of your argument is critical. You must be able to prove the facts on which your case is based if you wish to win. Evidence is presented at various phases of the judicial proceeding. When the claim or defences are filed, some evidence will be produced. There will also be deadlines for submitting evidence prior to the start of a trial.

What should I do if my opponent has no money but I have a strong case? 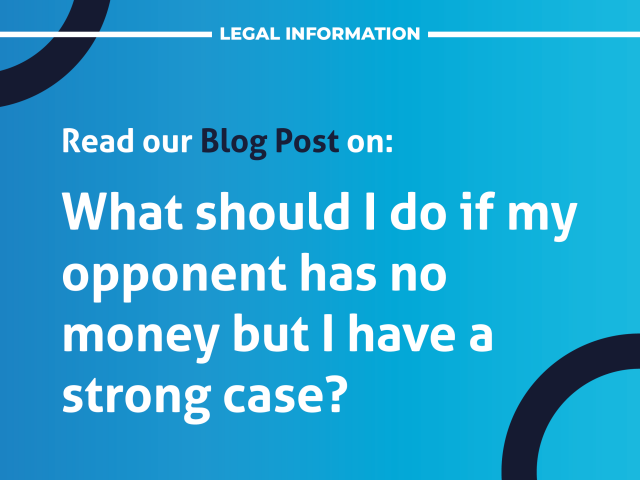 When considering litigation, one of the first things we consider is your opponent's financial sustainability. Before filing a case, most claimants would want some assurance that they will be able to recoup at least some of their losses and legal costs. So, what can we do to determine whether your adversary will be able to satisfy any judgement rendered against them?

The Ins and Outs of Mediation and Resolving Disputes in Scotland

Our Director, Billy Smith, sits down with Simon Horne, Service Director at Olive Mediation Group, to discuss the ins and outs of mediation and resolving disputes in Scotland:

Even with Covid-19, disputes happen. New guide to dispute resolution in Scotland

Recent statistics from Scotland’s Chief Statistician have revealed that the number of civil law cases initiated in Scottish courts has fallen to its lowest since current statistics began in 2008-09.

Sub-Letting is an Issue for Landlords and Tenants

As many as one in six (17%) tenants in the UK admit to having rented out part or all of their property to someone who isn’t on the lease agreement, new research by Direct Line for Business has found.

A new platform to help consumers and traders solve online disputes over a purchase made online has been launched by the European Commission.

Litigation Solicitor Vacancy in Glasgow - what could you bring to our team?

Complete Clarity Solicitors is looking for an experienced Litigation Solicitor to join its Glasgow office.

The recent opening of Scotland’s Civil Sheriff Appeal Court has marked the next step in the biggest modernisation of Scotland’s courts in a century.

Anti-Social Behaviour Will Still be Grounds for Eviction

Housing Minister Margaret Burgess has reassured landlords that anti-social behaviour by tenants will be grounds for eviction under the new Private Tenancies Bill.

The Scottish Government has published its Private Housing (Tenancies) (Scotland) Bill, which it says will ensure tenants have more security, stability and predictability when privately renting a home in Scotland.

Consumers who buy digital products, such as music downloads or ebooks, now have new legal rights when these products are faulty.

Tuesday 22nd September marked the start of the new legal year and also saw the official launch of the new All-Scotland Sheriff Personal Injury Court and the Sheriff Appeal Court.

A dispute between neighbours in Lundin Links in Fife over the height of a hedge has taken a new twist after the owners of the hedge turned it into a row of trees rather than scale back its height, reports the Daily Mail.

The latest civil justice statistics, published by Scotland’s Chief Statistician, have revealed a fall in the number of debt cases being considered by Scottish courts for the fifth year in a row.

A draft law to improve and broaden the use of a simplified procedure for low-value cross-border claims to recover money from abroad has been informally agreed by MEPs and the Latvian Presidency of the European Council.

Dispute between Neighbours over Height of Hedge

Scotland’s High Hedges Act has been used once again to resolve a long-running and bitter dispute between neighbours, reports the Telegraph.

The National Landlords Association (NLA) has spoken out against a recent Citizens Advice study that claims 740,000 households in England live in privately rented homes that present a severe threat to tenants' health.

A couple from Uddingston in Lanarkshire have successfully used the High Hedges (Scotland) Act to resolve a dispute with their neighbour over the size of leylandii trees in her garden, reports the Daily Mail.